I met Jake on my first date with my wife. After dinner, we went up to her apartment for a drink,[1] and I was greeted by the most adorable dog I'd ever seen. I think my exact words were "oh my gosh, I have to pick you up!" Little did I know that this small guy — who promptly growled until I put him down a couple of minutes later — would quite literally give me everything I have in life today.

Despite that growling (Jake is one small dog who doesn't like to be held), we bonded pretty quickly. He'd sit next to me, and even on my lap, and greet me when I came to visit, and great things like that. At the time I had a cockatoo (also very friendly, also very cuddly), and, as much as I loved that guy, having a small, furry friend was exciting and new. I'd always been more of a cat than a dog person, but Jake was the perfect combination: all dog in personality, all cat in maintenance required. 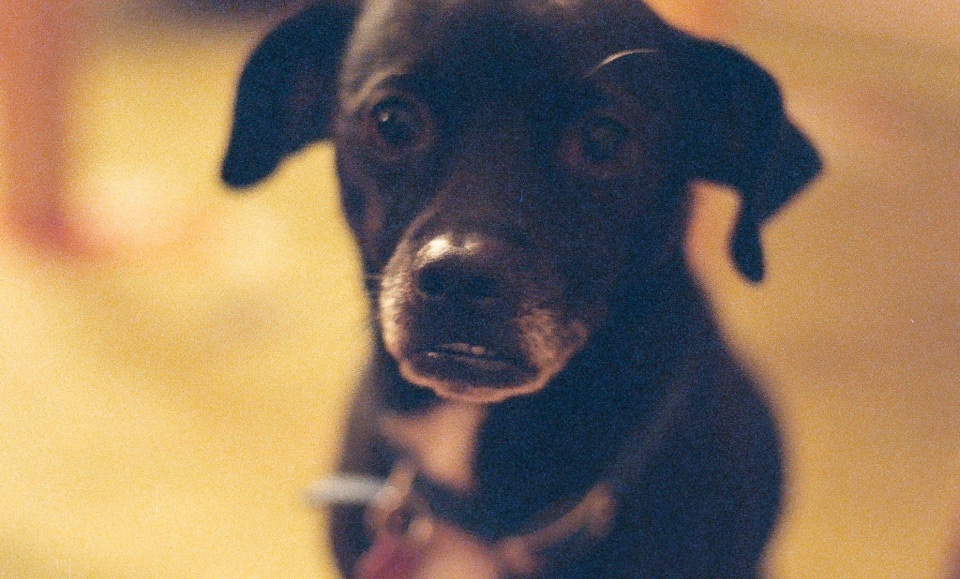 In fact, I was pretty promptly more infatuated with Jake than with my future wife. At about 8 weeks of dating, we were having fun, but hadn't really connected yet, and I'd decided to break up with her. But, when I thought about it, I just couldn't bear not seeing Jake again. The absurdity of dating a woman just for her dog wasn't lost on me, so I made myself a deal: I could date her for 2 more weeks, but then I had to break up with Jake.

The rest of the story is pretty simple: two weeks later, I was head over heels for the girl. But, for those two critical weeks, Jake was what kept me coming back. If he hadn't accepted and loved me, I would have moved on, and missed out on the woman who makes me happy and who helps me be the best me; our adorable, fun son; our lovely home; even the rewarding career that she encouraged me to get back into. All of this is thanks to one small, black dog.

What was it, apart from his dogly good looks, that attracted me to Jake from the beginning? Certainly, his calm, cool attitude played a role; but so did the way he was unexpectedly adorable. 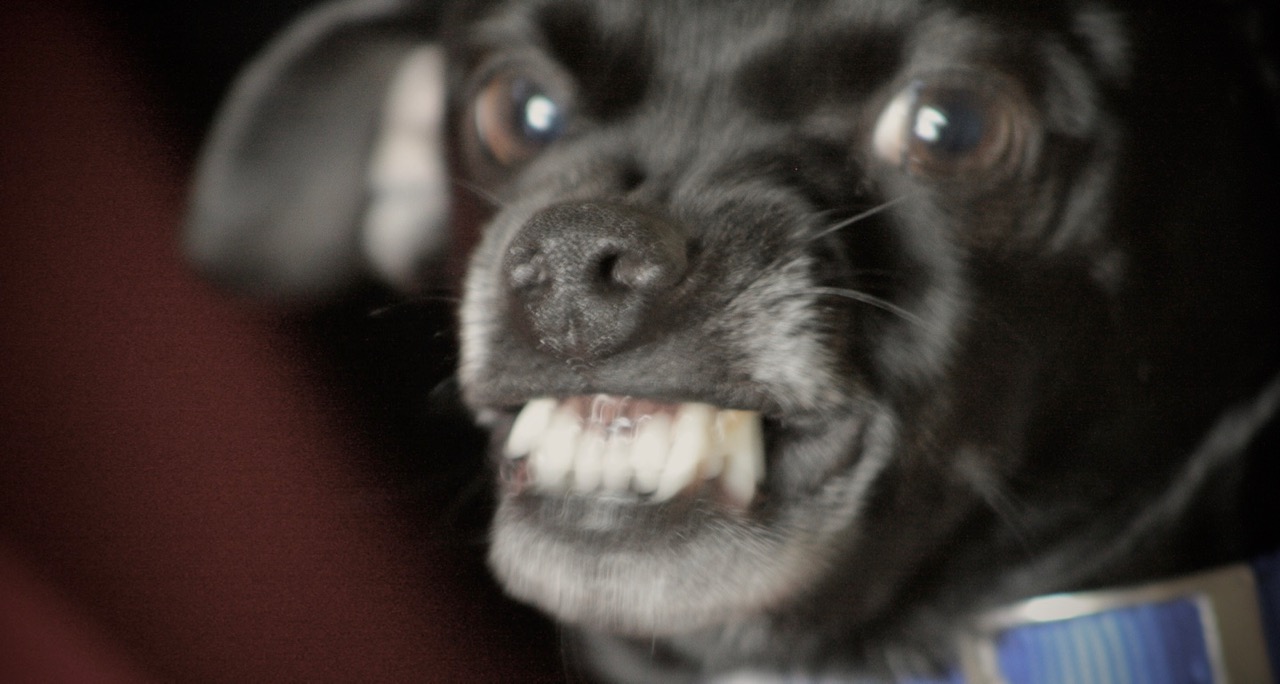 The first thing to understand about Jake is this: he was an alpha dog. The second is that he was a both mellow and sensitive. Calm, collected, in charge, he always asserted himself (without excessive aggression or urgency); always knew what was needed; and always did it. Everything from barking at the mailman to comforting the sad, Jake did it all.

That's right: comforting the sad. If there was a sad person in the room, Jake would jump up and sit on their lap. He'd seek out the person who needed him most, and then look up at them with his soulful eyes. Sometimes he'd give them one small kiss, or even lay a paw on their cheek. He was a champion comforter.

Surprisingly enough, he slept under the covers with us at night. He'd burrow right down and curl up against your hip or in your armpit. That's a sufficiently exotic thing for a dog to do that I didn't realize it was him at first — arriving at my then-girlfriend's house one day, I observed "you take a lot of naps, huh?" Turns out a 15lb dog can get your bed as messy as any teenager.

Years later, his mother and I moved in together. Jake was laying in our bed, all cozy, one weekend morning, when I decided to let my parrot get on the bed. This parrot had been chasing Jake around as long as he'd known the dog, saying "gimme a kiss!" Jake had no interest in a kiss, and would avoid the parrot. Suddenly the parrot was on Jake's bed, Jake's special place, and, equally suddenly, Jake threw up. His greatest nightmare had come true, his special place was sullied by a bird's presence.

Poor Jake and his cozy bed! We petted him a lot, and loved him, and he got used to the parrot on his bed. He never liked it, never gave him a kiss, but he got used to it. 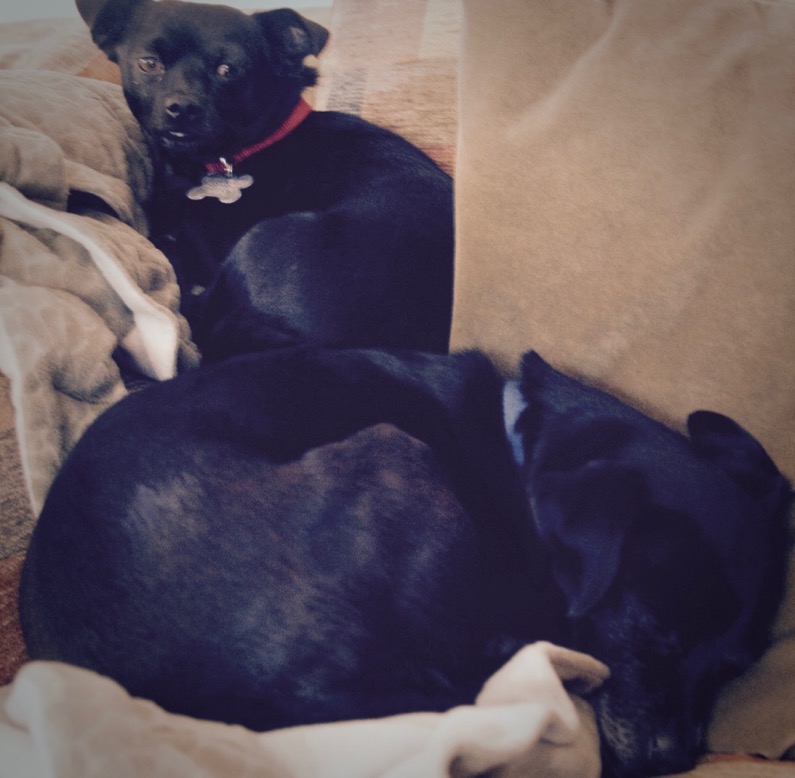 Another animal Jake got used to was his little brother, Charley. Charley's a small, black rescue dog, just like Jake, cute as all get-out and probably a Chug.[2] Charley was raised on a rural property owned by an animal hoarder with more than 40 dogs and cats. The dogs were all big, and many attacked Charley, so he mostly hung out with the cats, who were at least his size. When he came to our house, he had no idea how to be a dog at all: he didn't know how to play, didn't lift his leg, barely sniffed around, and hardly barked. Jake taught him how to play, to be cozy, and just where the softest place was to sit. Charley idolized him and followed him everywhere. In all honesty, we didn't realize how feral Charley was when we got him, and were pretty unqualified to domesticate him; without Jake, Charley would probably never have come out of his shell and learned to be as adorable and lovable as he is.

As for me, Jake and I really bonded as my relationship with his mother progressed: I worked from home, so she frequently brought him over to my place during the daytime so that he could not be alone (and be able to poop in my backyard). I'll admit that I bribed him; I had a bad Jack-in-the-Box problem at that time, and every day I'd give him a little piece of my burger. Over time, those little pieces got bigger and bigger, until he had almost a fifth of a burger every day.

I remember vividly when my wife looked at me and said, shocked, "is my dog fat?"

He and I both went on a diet, but it turned out Jake liked sitting next to me as I worked, even without the hamburger bribe. In fact, he probably always liked it; it's just hard not to give a cute dog some scraps. 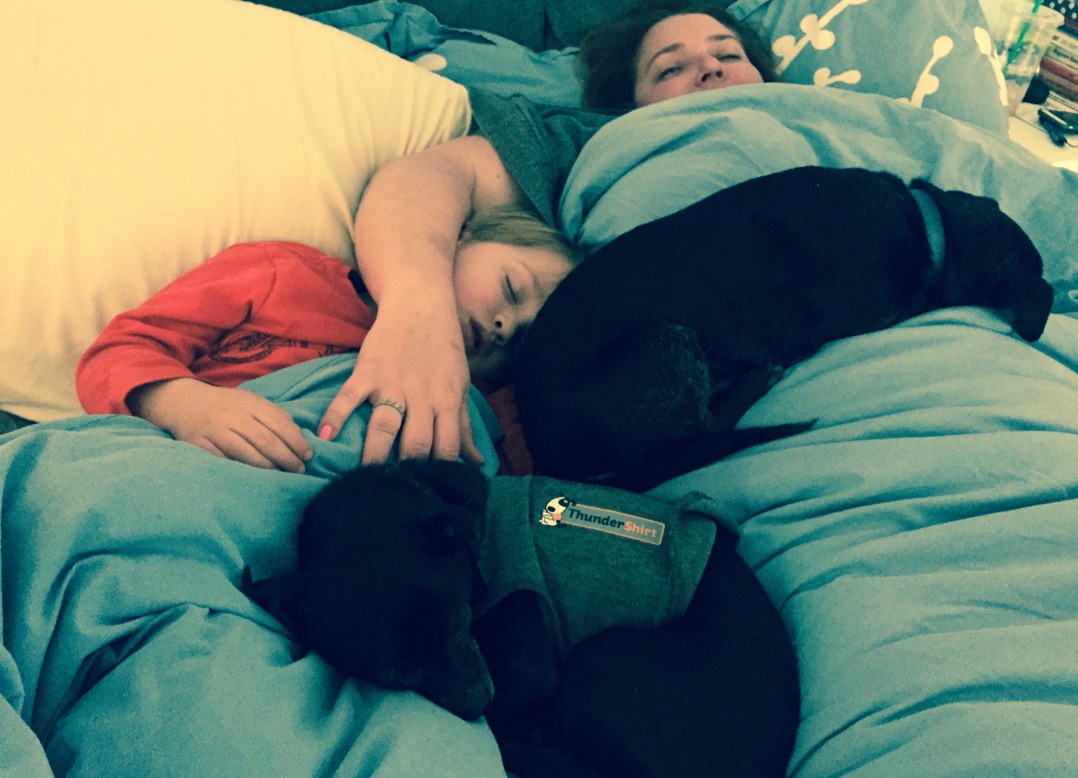 When our son came along, Jake discovered a new side of himself: professional guard dog. Every day, he sat right outside my baby son's bedroom door, on alert for anyone who would come by. When we watched him and cared for him, Jake's eagle eyes were on us too. Pinch him getting dressed? Manhandle him a little too much changing a diaper? Jake would give the stink eye.

So I became a better dad. I was a delicate, systematic diaper changer, a fast dresser, and more. Jake would look suspiciously, but there would be no glare. I knew if I got the glare, I'd screwed up. I didn't want to screw up.

One day, Jake started eating his poop. We tried all kinds of supplementation to keep him from needing/wanting to — everything from minerals in case he had a deficit to capsaicin to make the poop unpleasant to eat — but nothing helped. One day I found out that, when a dog has a puppy, that dog's parents[3] would eat the poop around the den so that predators couldn't stalk the puppy. Disgusting: yeah, but what it meant is that Jake saw our son as his puppy. Who could be a better uncle than Jake?

Jake taught me a lot, too. He was a big fan of being cozy, and helped me think about how I could make my own life better. He knew how to relax, a message I needed at a time in my life when I rarely thought of actually giving myself a chance to take time off. He was single-minded in his love for his mother at a time I needed to see an example of settling down. He provided focused, one-on-one attention, while I'm forever looking at my phone or what's going on in the background.

Jake, were he a human, would be the human I want to be.

And he was the dog I needed, too. I always loved dogs — really, I love most animals[4] — but I never wished I had one full-time. Big dogs are beautiful and lovely companions, but they need to be trained and walked and exercised and a bunch of things I'm too lazy and irresponsible to do.[5] I'd never considered the cat-sized dog. 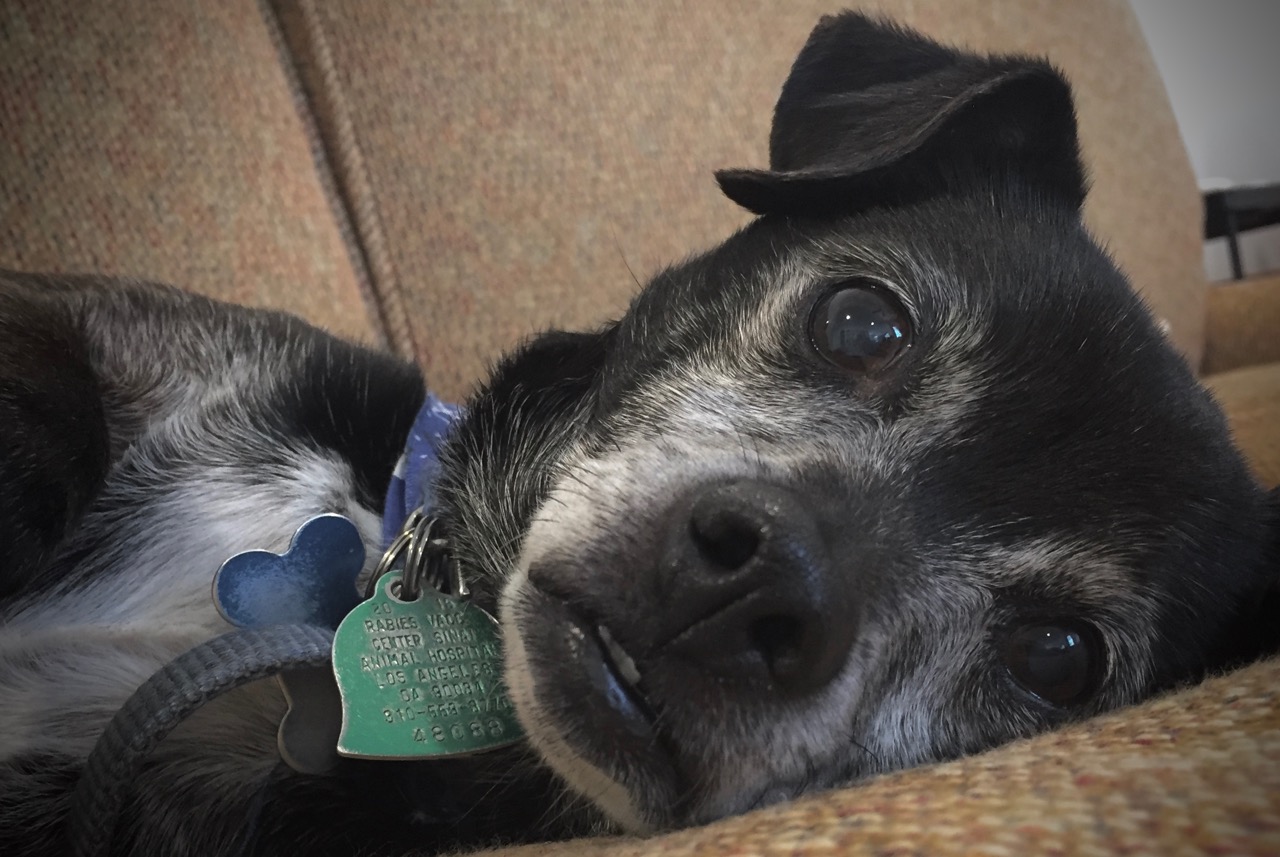 Jake was a perfect amount of dog and responsibility for me. He really acted like the big dogs I'd hung out with and sat in the past, but mellower. Even though he wasn't the best-trained dog, a 15lb dog misbehaving is no more inconvenient than your standard house cat. He could sit next to me, or on my lap, without disrupting my whole life like certain Labs I've known. He loved a walk but was fine with the exercise he'd get playing in the backyard.

Jake passed away two weeks ago. He was perfectly healthy almost until the end, even getting a clean bill of health at his checkup just a few months ago. Then, one day, he jumped wrong and hurt his back. Shortly after, his liver and kidneys started to fail, his blood test showed signs of lymphoma, and a serious bacterial infection took over his mouth. Five days after he first came up lame, we brought him to the vet and he fell asleep one last time in our arms.

So thanks, Jake, for teaching me so much, and being my buddy, and being my son's buddy, and, most of all, for being my wife's best buddy. I hope that we gave you the cozy, friendly, happy home you wanted. I love you and miss you; we all do. If there is a dog heaven, I know you're there, because you were an angel here on earth.

I'll think of you every day. 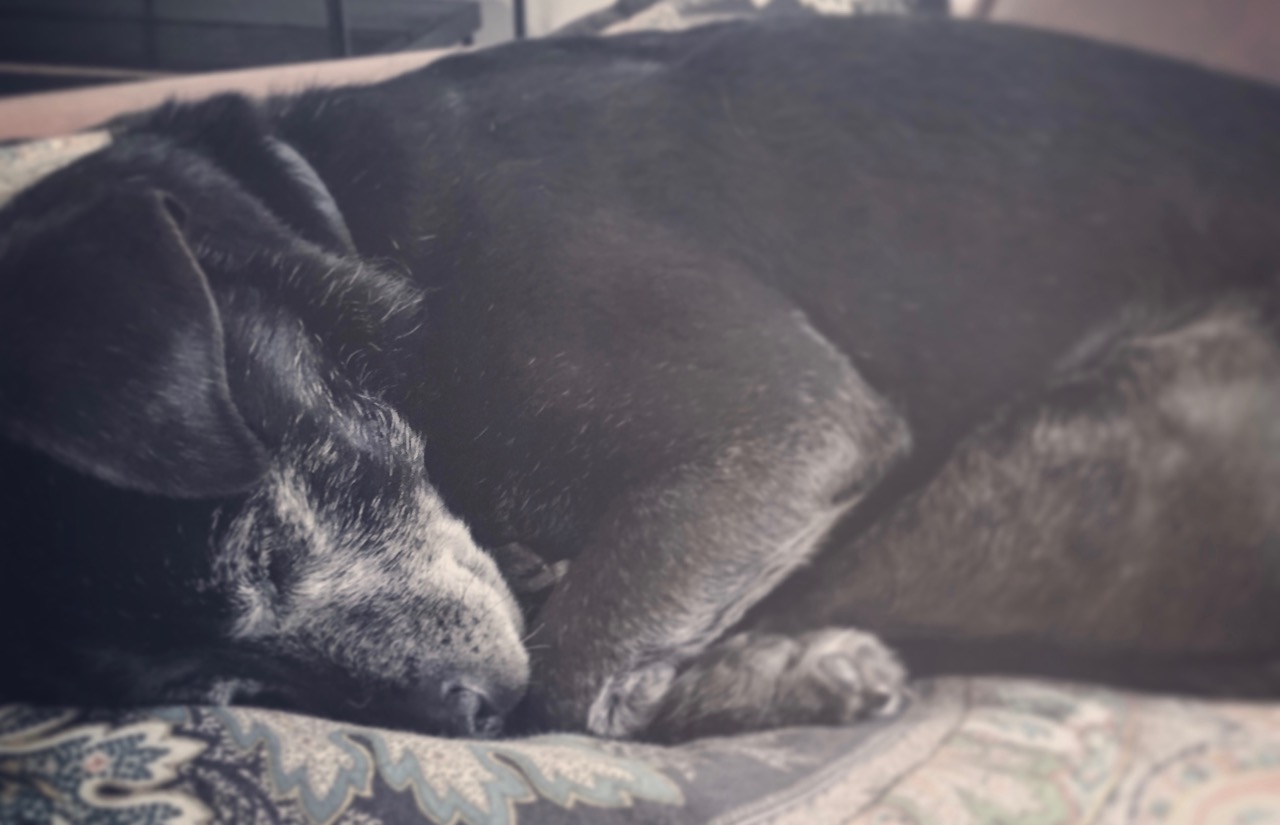